Hemorrhoids
There are two types of hemorrhoids based on location. Internal hemorrhoids occur inside the lower rectum and often can’t be seen or felt. As this form is typically painless, the only symptoms you may notice are small amounts of bright red blood (on your toilet paper or inside the toilet bowl) or a feeling of fullness following a bowel movement.

External hemorrhoids occur as bulges or lumps around the anus. Because of the sensitive nerve fibers in this area, these enlarged veins are often painful, especially when sitting. They also may bleed and itch. Should blood pool in an external hemorrhoid, a blood clot referred to as a thrombosed hemorrhoid may develop and cause severe pain. 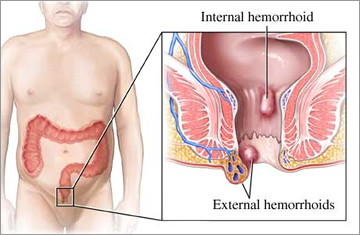 Home remedies such as creams, suppositories and warm baths may offer temporary relief from the symptoms of hemorrhoids. But for many people, hemorrhoids don’t go away. Instead, they can get progressively worse over time, growing in both size and number. Some chronic sufferers develop hemorrhoids in as many as three locations.

Fortunately, you don’t have to put up with recurring flare-ups and increasing pain. You can seek professional medical treatment now, and end your discomfort for good.

We use the patented, CRH O’Regan System™, considered the “gold standard” treatment. This highly effective (99.1%), minimally invasive procedure is performed in our office in less than a minute. If there are multiple hemorrhoids, we treat them one at a time in separate visits.

During the brief and painless procedure, our physician specialist places a small rubber band around the tissue just above the hemorrhoid where there are few pain-sensitive nerve endings. Unlike traditional banding techniques that use a metal-toothed clamp to grasp the tissue, we use a gentle suction device, reducing the risk of pain and bleeding.

Our banding procedure works by cutting off the blood supply to the hemorrhoid. This causes the hemorrhoid to shrink and fall off, typically within a day or so. You probably won’t even notice when this happens or be able to spot the rubber band in the toilet. Once the hemorrhoid is gone, the wound usually heals in a week or two.

During the first 24 hours, some patients may experience a feeling of fullness or a dull ache in the rectum. This can typically be relieved with an over-the-counter pain medication. A remarkable 99.8% of patients treated with our method have no post-procedure pain, however.

In fact, thanks to design improvements, our procedure has a ten-fold reduction in complications compared to traditional banding.

For one, our instruments are smaller, affording greater comfort for patients and better visibility for physicians. Unlike other devices, they are also single use and 100% disposable.

In most cases, banding can take place during your first appointment. After all, once you know what the problem is, why wait to get relief?

The first appointment will consist of, at a minimum, a consultation with a physician. During diagnosis, we may perform a digital exam as well as a sigmoidoscopy, a visual examination of the lower bowel using a lighted tube connected to an eyepiece.

If the diagnosis is hemorrhoids, treatment can start immediately. In the event of multiple hemorrhoids, often the largest, most symptomatic hemorrhoid is banded first. Additional appointments are then scheduled to treat the remaining hemorrhoids at two week intervals with a final check-up and optional colorectal cancer screening three weeks later.

Soon you’ll be feeling much better, but you’ll need to make some changes to prevent future problems. Straining due to constipation should be diligently avoided, so be sure to drink seven or eight glasses of water (around 50 ounces) a day and add two tablespoons of natural oat or wheat bran to your diet. (Metamucil, Benefibre, flax or other soluble fiber may be helpful as well.)

We also recommend that you not sit longer than two minutes on the toilet. If you can’t have a bowel movement in that time, come back later. This two-minute rule can help keep you from straining during bowel movements without realizing it. Finally, when traveling by air, stay hydrated, avoid alcohol, eat fiber and walk around when you can.

The CRH O’Regan System is appropriate for an estimated 90% of hemorrhoid patients. Only the most severe cases require surgery (hemorroidectomy), which is just one more reason not to delay treatment. If you wait too long – and your hemorrhoids grow too large – your non-surgical options decrease.

The chief complaint about conventional rubber banding – which demonstrates superior long-term efficacy over other non-surgical methods – has been pain in 4-29% of cases. In contrast, only 0.2% of patients treated with our advanced technique experience post-procedure pain. Our method is also faster, more accurate and has virtually no downtime.

Over the years, a number of new treatments have been devised for hemorrhoids, but none has outperformed the CRH O’Regan System. Among them are infrared photocoagulation, or the use of lasers to burn the hemorrhoid tissue, and stapled hemorroidectomy, a surgical variation that uses a circular stapler device to life and remove the hemorrhoid. 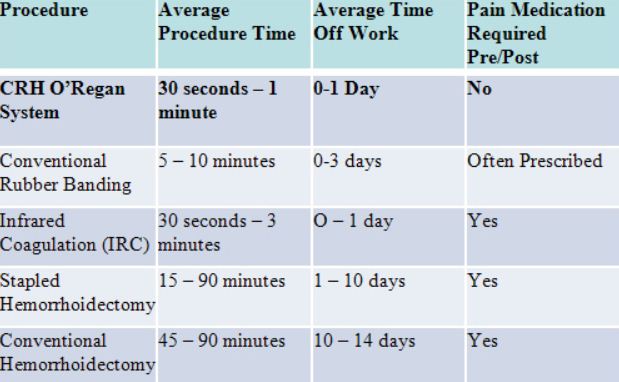